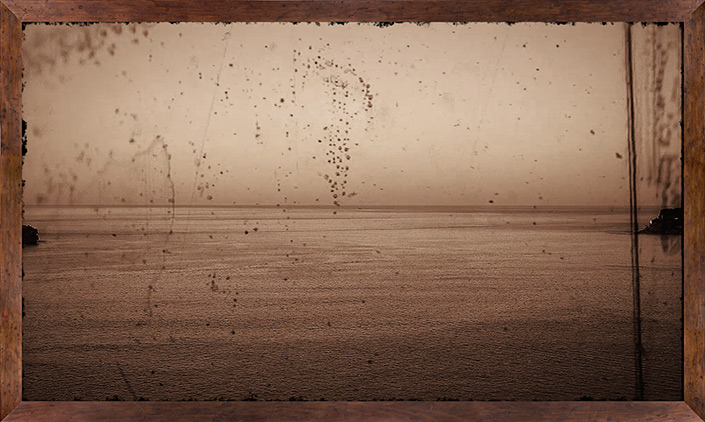 When the White Ghosts Sailed in 2017 - video still

Tracey Moffatt’s short film The White Ghosts Sailed in presents a twilight world of sea, earth and sky that, through the convergence of sound, image and text, conjures up what could be described as the phantasmagoria of history.¹ In this film the ghosts are largely invisible; they can be heard rushing by, perpetually beginning again, endeavouring to be made flesh, encountering other kinds of spectres emerging out of sea, stone and sky.

The residue of photosensitive emulsion becomes a stand-in for this history and a metaphor for this flesh; the supposed emptiness nullified by the guiding human eye. The White Ghosts Sailed in is a direct representation of a single yet continuous event. It is not spliced like Moffatt’s collaborative cinema montages with Gary Hillberg, which use repetition to turn stereotypes back on themselves, but spliced nonetheless to conjure time.²

Excerpt from A sublime passage, My horizon p 112

1. For a concise and pertinent history of phantasmagoria and its relationship to the evolution and perception of cinema and the imagination, see T Castle ‘Phantasmagoria: spectral technology and the metaphorics of modern reverie’ Critical Inquiry vol 15, no 1, autumn 1988, pp 26–61. For the application of Castle’s ideas to the cinema of Moffatt, see G Turcotte ‘Spectrality in Indigenous women’s cinema: Tracey Moffatt and Beck Cole’ Journal of Commonwealth Literature vol 7 no 43 2008 pp 7–21