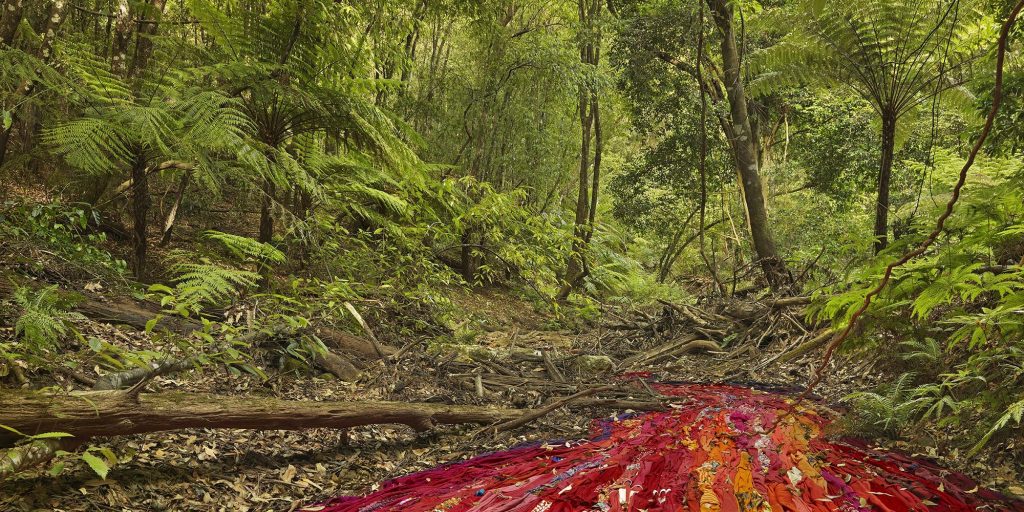 Wildflower 2017 from the series Buddens

Water and air are necessities of life on our blue planet and we approach land from water like a refugee looking for respite, knowing that the excess of water drowns. Air fuels fires making them grow and move, the lack of water results in drought, in salt, a poisoning of the earth. The earth swells, burns, dries out and supports life when it can. In the face of wars, wrecks, made and natural destruction, as much as the opposite – regeneration, we build shelters. We fence and furnish these as we try to impose order on the precariousness and relative insignificance of life. As can be seen in the series leak 2010, brumby mound # 5 and #6, burning Ayer #12, and groundspeed works, furnishings and shelters are inside out or simply outside. There is no shelter, no home. In Buddens (and The Paper 2013 where each day’s newspaper is returned to the forest to rot), a fallen tree or branch may point the way, but which way are we travelling? These works invoke Alexis Wright’s The Swan Book 2013 in which internally and externally displaced people end up in the swamp, a giant Australian gulag; by the end of the narrative all living creatures are forced to flee ruined cities and a drowning, out of kilter world.

The air, the conditions of the atmosphere, flows through Laing’s work, opposing the static nature of the photograph. While the history of photography, like that of painting, is littered with attempts to exceed the flatness of the picture plane, the photograph has an additional, uncanny relationship to the real and its correlative, time.¹ The very stillness and silence of the photograph as an object in itself, is animated by the desire to see it as an embodied extension of ourselves. Laing works with and against this desired familiarity, and the picturesque, both visually and through her naming of her series and the individual works. These can vary from the direct recording of a time and place to a name or phrase which seems oblique and provocative, requiring us to examine the distinctions between sight and thought. Tinkering with convention and aestheticising the domain, or not, is a treacherous business and the historical weight can be heavy. Laing’s confrontation of these is overt in the series to walk on a sea of salt where she opens up the visual narrative in, for example, after Heysen, very clearly examining art of the modernist period which had come to represent a particular Australian identity.² This continues in leak 2010, where the individual works are named after characters in writer Patrick White’s The Twyborn Affair 1979, a novel which scrutinises the uncertainty of Australianness, gender, and the attempts to graft identities onto each other. The importance of naming, and contrarily the fluidity of meaning, is notable in all of Laing’s work. The restlessness in White’s novel crystallises around a sickly transported flower given to Eddie during his time working as a jackeroo in the Cooma-Monaro region of New South Wales, ‘… a single, white, wintry rose, possibly the last rose ever, its invalid complexion infused with a delicate transcendent green.’ ³ The variable climate of this high country is presented by Laing in leak with long views and heroic panoramic form. Her interference in this environment is startling as testified by the skeleton of the larger than life size upside-down house protruding from a hillock.